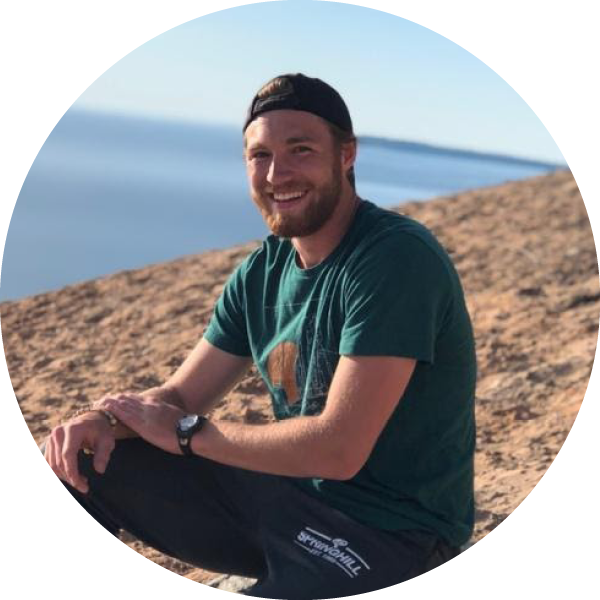 Hunter is a junior at Oakland University studying pre-physical therapy. Hunter joined Cultivate’s process in the spring of 2019 and has grown tremendously in his faith and as a leader since joining. When Hunter began the Cultivate process, he thought that he was “close” to God, but what unaware of the intimacy that could have with the Father.

As a freshman Hunter spottily attended Younglife, a campus ministry at Oakland University designed to help people experience the Lord. From the moment he walked into Younglife it was clear that he had a passion for the Lord. Hunter demonstrated maturity and knowledge in his faith but lacked direction. As Hunter adjusted to college life, he became consumed with other things such as tennis, his dorm, and what his new friends thought of him. Hunter believed that he had held true to his faith, but he was not growing in his relationship with God.

In the fall of 2018 Hunter began regularly attending Younglife and quickly became a figure others looked up to. Hunter’s winsome personality and maturity drew others towards him. In early March of 2019, Hunter’s journey with Cultivate began. After attended a Younglife retreat titled: rekindle, which focused on reigniting your fire for the Lord, Hunter came back with a drive to pursue the Lord fully. This coupled with his best friend accepting Christ on the retreat, Hunter was finally ready to go all in.

Within a week of the retreat, Hunter began meeting with a mentor, Kyle Vens, who helped to guide Hunter in his early steps pursuing the Lord. As Hunter began to seek the Lord more avidly, things within his life began to change. Hunter experienced significant hardships in the weeks to come but held tight to his newly ignited faith. As Hunter and Kyle continued to meet Hunter learned how to pursue the Lord daily, as opposed to only on Sundays. As Hunter continued to grow in his faith he began to meet with Tim Kade, the lead pastor at Epic Church and discipler within Cultivate. Tim and Hunter now meet weekly. Tim has been a crucial part of Hunter’s continued growth as a leader and man of God.

Hunter’s passion for the Lord sparked the interested of Younglife and in the spring of 2019, he was asked to be a part of Younglife’s leadership team. Hunter’s drive and natural leadership skills proved to be an asset to Younglife’s leadership team. Hunter became one of the key outreach team members bringing in new people every week. In addition to this, Hunter began meeting with other young men within Younglife and helping them overcome the obstacles they were facing. As Hunter grew as a leader, he was given the opportunity to speak for Younglife and did an extraordinary job sharing the importance of community.

In the Fall of 2019 Hunter was asked to be one of the main speakers for Younglife. Hunter’s knowledge of scripture, humor, and heart provides him the tools needed to be a talented speaker. Hunter meets with Cultivate’s team of speaking coaches to help him prepare for messages and to review the messages he’s given. Since Hunter began meeting with our team he has grown as a speaker and now speaks with more clarity, confidence, and depth.

Hunter’s focus on speaking has not deterred from his desire to evangelize. In addition to Hunter’s leadership in Younglife, he is a resident assistant in a dorm on campus. This semester Hunter led two of his residences to Christ! Hunter has developed relationships with these two individuals and has been a constant source of support for these two freshmen as they begin to follow the Lord.

Hunter attributes much of his growth as a man of God to the community and fellowship he has with other Christ-followers. Hunter meets regularly with 6 other men in one of cultivates life groups focused on self-discovery. Through this group, Hunter has learned a lot about himself as well as develop deeper relationships with the men in the group. Hunter wanted to emphasize the impact this community has had on his life and as a follower of Christ.

Hunter plans to graduate Oakland in the Spring of 2021 with a BA in exercise science and plans to get his doctorate in physical therapy at Oakland University. He hopes to remain active within Younglife’s ministry over the next two years and to continue to grow in his faith and as a leader.

Below are quotes from Hunter about his time in Cultivate.

Cultivate, and the relationships formed and introduced by it, has shaped and formed me into a better man. My time in cultivate has opened my eyes to the wonders of God, and the many many more I have yet to learn. It has taught me that spiritual growth is continual and ever-changing, but the God we serve is always the same. Cultivate is truly amazing.

These are quotes from Kyle Vens, one of Hunter’s mentors, about Hunter’s time in Cultivate.

Since joining Cultivate Hunter has grown as a leader and as a man of God. Hunter has grown in his ability to take captive his emotions and thoughts and test them against the spirit. Hunter has also grown in his emotional maturity and now handles controversy with Christ at the center. Hunter has become a beacon of light to those in his life and has truly become an effective kingdom worker. I could not be prouder of Hunter and the man he is becoming.